Sales of new phones have collapsed in the biggest fall since the invention of the smartphone.

The outbreak of the coronavirus in China had a huge impact, report author Linda Sui said.

"Some Asian factories were unable to manufacture smartphones, while many consumers were unable or unwilling to visit retail stores and buy new devices," she said.

February was set to be a big month for the phone industry, with its major annual Mobile World Congress showcase, where many new phones are unveiled for the first time. 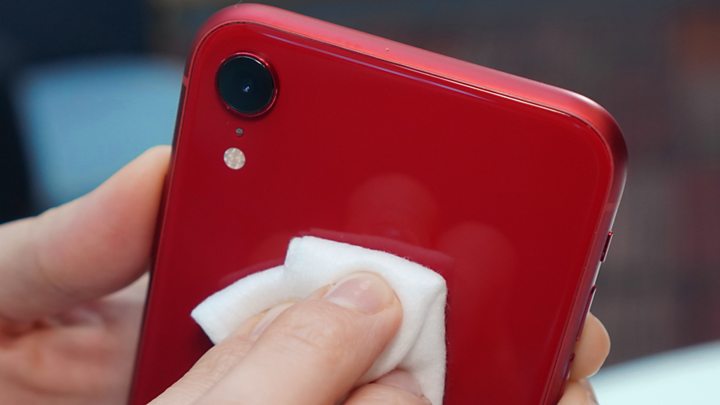 Media captionWATCH: How to safely clean your smartphone

The event was one of the first major conventions to be cancelled due to coronavirus.

Samsung, which revealed its latest flagship S20 phones in February, has reportedly seen slow initial sales of the devices.

Meanwhile, Apple warned it would miss its profit forecasts and said that worldwide iPhone supply would be "constrained".

"Supply and demand of smartphones plunged in China, slumped across Asia, and slowed in the rest of the world.

"It is a period the smartphone industry will want to forget."

The research firm said it expected smartphone shipments to continue to struggle throughout March, now that the virus has spread through Europe and into the United States.

Hundreds of millions of potential customers are now in lockdown - or unwilling to head to the shops.

Despite its warning about financial targets being missed and difficulties with iPhone supply, Apple announced two new products this week - a new iPad Pro with laser-scanning technology, and a new MacBook Air.

But it did so by press release, rather than at a high-profile event as would be usual.

Analyst Ben Wood told the BBC it was "the first time I can remember that Apple has announced such a high-profile product with such little fanfare".