New York (CNN Business) A week ago, it'd be easy to dismiss foldable smartphones as a trend that never became a full-on fad. After all, Samsung's Galaxy Fold model, at nearly $2,000, famously broke for early reviewers, and the newly-launched $1,500 Motorola RAZR flip phone -- twice the cost of an iPhone 11 -- touts mostly lackluster features, including a small battery and plastic screen.

But Samsung's Galaxy Z Flip phone, announced Tuesday at a press event in San Francisco, could be the device that breathes new life into the buzzy concept that borrows heavily from designs of the past.

The 6.7-inch smartphone folds into a square about half its size, with a small rectangular display on the front cover for notifications. It comes in three colors — purple, black and gold — and goes on sale Friday February 14 in select stores and online.

At $1,380, the Z Flip is far from affordable, but with a new, sturdier design and almost as much computing power as the Samsung (SSNLF) flagship smartphone, the company could be onto something. 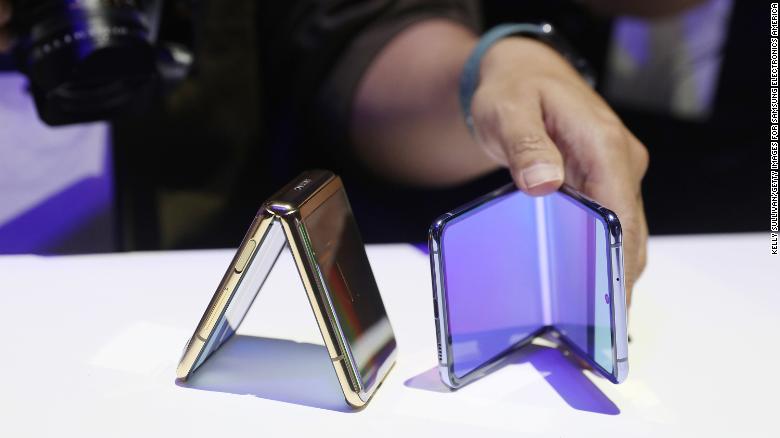 "After years of complacency in the smartphone market, waiting for some design innovation, there is little doubt that foldable smartphones are set to become the next technology innovation trend," said David McQueen, research director at tech advisory firm ABI Research. "Despite the obvious and immediate issues with getting them to market -- notably high barriers to entry, extreme hardware innovation, seamless user experiences and current eye-wateringly high prices -- foldable displays are set to become an important form factor in future product portfolios bringing much needed innovation into device design."

Beyond the nostalgia factor, there's a lot of appeal in a phone that shrinks in size and shuts close. At a time when smartphones light up and scream for us to grab them with each notification, snapping the device down is a refreshing change. (Like the RAZR, the Z Flip features a small display on the front so you can still see notifications come through if closed.)

Upon first impression, the Z Flip is the clear standout in the emerging foldable phone wars. Unlike the RAZR's plastic display, the Z Flip features a layer of ultra-thin glass that opens and snaps into place with ease. It packs a powerful processor and decent battery life and does most of what you'd expect from a smartphone these days. The Galaxy Z Flip stays true to its name by adopting the clamshell design typical of flip phones (the Galaxy Fold folded vertically outward, similar to a book).

The change to the hinge here is critical: It now features a small, internal brush-like system to push out debris and opens and snaps into place with ease. (Samsung claims it can open up to 200,000 times without damage.)

The downside of making the hinge horizontal, however, is a noticeable crease that resides in the center of the display, where users are often swiping and opening apps; you can both see it and feel it. It's a reminder that manufacturers are still trying to figure out how to approach the design. It's rumored that Apple could be working on a foldable concept, as well.

But for now, it's hard to get over the price -- something that will likely pigeonhole it as a niche product. It's only $20 less than the high-end Samsung Galaxy S20 Ultra, which boasts 5G capabilities, a super responsive touchscreen and an incredibly powerful set of cameras. Considering the Flip Z's price is $600 less than the Galaxy Fold, it signals Samsung is trying to figure out its place in the market.

Another key factor in determining the price is materials; the original Fold was basically two thin smartphones sandwiched on top of each other.

"This time it's one smartphone cut in half, so there are some price savings to be had," said Ramon Llamas, a director at research firm IDC. "Samsung continues to see an opportunity to differentiate itself in an otherwise copycat market and still make some money off of it. It already has the innovation chops and the manufacturing capabilities to do this themselves, and it's practically a category that it can claim as its own until foldables gain greater salience. That's a strong position for Samsung."

But could flip phones once again be the next big category of devices? For now, that may be a leap, but if executed correctly, Z Flip's "wow" factor will entice early adopters and eventually a larger audience. Get the price tag down to three digits, and things could get very interesting.

"For most consumers, phones have become predictable, boring and uninspiring. Standing out is not a bad thing," said Ben Stanton, senior analyst at tech market firm Canalys.